A recent BMW 320i with the B48 4 cylinder petrol turbo engine with us. Fault of hesitation/ jerking sensation under acceleration. This car had been to a garage and bmw dealer previously but unable to locate the fault.

Road tested vehicle to confirm the fault under acceleration. Fault codes showing the engine is running too lean. Which means there is too much air going into the engine (or so it thinks) to fuel expected detected by the ecu using the various sensors fitted.

A fuel tank breather valve had been fitted previously by the bmw dealer, which is a known fault on this engine, but did not resolve the fault.

Using the bmw diagnostic system makes our job much easier to locate and rectify faults but it’s not always the silver bullet.

Using the diagnostics we ran through several air to fuel mixture tests. All passed ok but this is with the car stationary in the workshop. This fault only occurs whilst the engine is under load/ acceleration on the road. We then smoke leak tested the intake system, pipes, manifold, etc. No smoke present proving the intake system is tight and no allowing any extra air into the engine. Moving onto the turbo and exhaust and no smoke/ leaks either.
With the fault not showing in the workshop we took the computer on the road with us to inspect the live data readings to see if we can see any abnormalities to locate the fault.

Air mass, intake manifold and fuel pressure sensors showing plausible readings to the specified requirements. It took a while to locate as the fault was intermittent under acceleration. But eventually we found the oxygen sensor reading would go lean the same time as the hesitation/ jerking sensation. Upto 1.81.
Unfortunately the bmw diagnostics live data readings are not easy to read when they are changing quickly. So we grabbed the Bosch diagnostic system where we can graph and record the live data to easily read our findings.

The oxygen or known as a lambda sensor is located in the exhaust, either in the manifold or after the turbo if one is fitted. The sensor does what its called and measures the amount of oxygen present in the exhaust exiting the engine. A lean condition means not enough fuel so the ecu will then injector more fuel to compensate. Then a rich condition means too much fuel, the ecu will then inject less fuel. This is constantly monitored and adjusted to try to reach lambda 1. The ‘perfect’ air to fuel ratio.

As we could see from our sensor it would intermittently spike lean at 1.81. Rather than smoothly adjusting around lambda 1.
Next was to test the sensor & wiring directly, as an oxygen heater fault was also stored previously. All circuit tests passed ok. With the sensor removed we could visually see the engine/ exhaust gas is in a lean condition, with the sensor tip being white in colour. 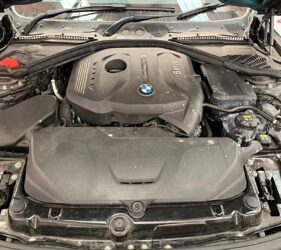 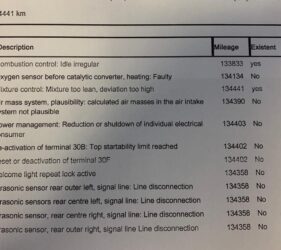 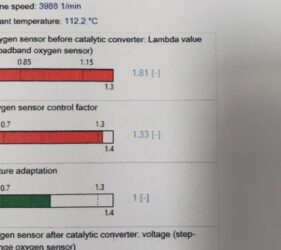 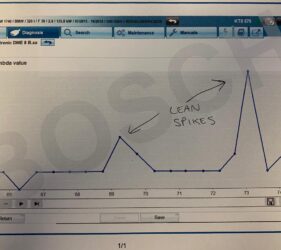 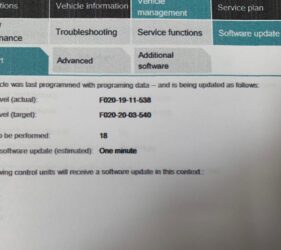 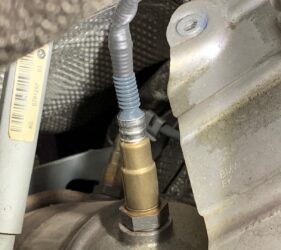 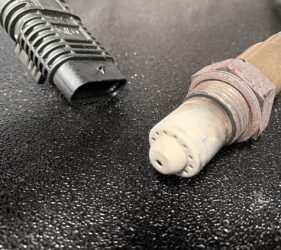 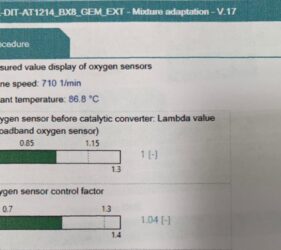 With all other systems tested without fault to cause a lean condition. We suspected the sensor had an intermittent internal fault.
With the oxygen sensor replaced, vehicle software level updated & adaptations reset. We road tested the vehicle and it now drives as it should.
Tried. Tested. Fixed. 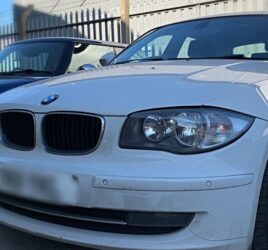 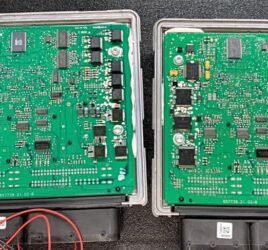 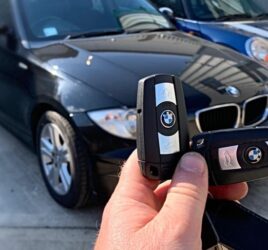