The chap who owns this car booked 6 weeks in advance and waited patiently until we we’re able to take a look at it as he didn’t want anyone else touching it, we appreciate that!
The problem with the car was the engine had a surging sensation under acceleration and intermittently putting the engine light on.

We drove the vehicle to confirm the fault, it was surging under acceleration. Back in the workshop we plugged into the diagnostics to read the fault codes. X2 stored for fuel rail plausibility delivery controlled and x2 for dde control unit internal. The internal control unit faults can be ignored as they do not cause any running faults. However the fuel rail plausibility ones certainly do, so we carried out a test plan on the diagnostics which aid us greatly in the right diagnosis of the fault. 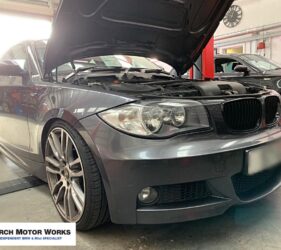 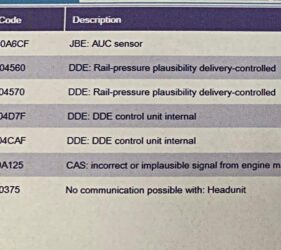 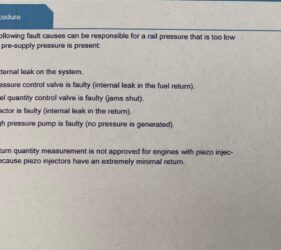 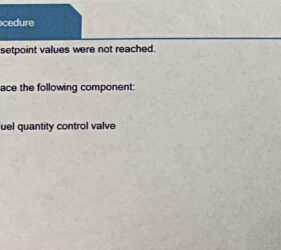 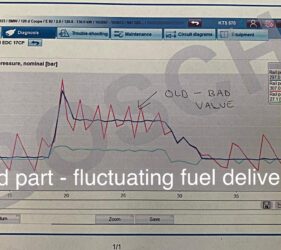 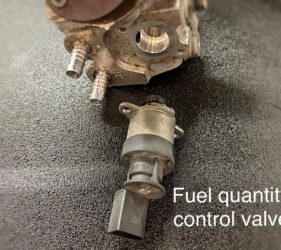 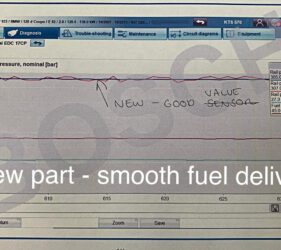 So fortunately the diagnostics have made this one easy for us and it’s new part job done I guess.
However it would be foolish to rely on the diagnostics without testing the part ourselves.

We then looked at the graphed live data whilst driving the car to see how the fuel system is behaving. As expected the fuel pressure is fluctuating up & down under acceleration at the same time as it can be felt through the car.
As seen in the graph picture, the red tracer line. Back in the workshop we scoped the activation/ control lines of the fuel quantity control valve which are all correct and plausible, proving the wiring and ecu are all ok. Meaning the diagnostics we’re correct and the valve is faulty.

Fortunately we have a few high pressure fuel pumps for the N47 engine in stock with valves attached. With a replacement fuel quantity control valve fitted, engine adaptations reset & faults cleared.
We road tested the vehicle again with the live data graph which shows a steady fuel delivery as expected, with no more surging under acceleration.

All fixed within a couple of hours and returned to the customer on the same day. It was worth the wait he stated Thanks again to our loyal customers for their patience & custom!

in BMW / Fault Diagnosis and repair